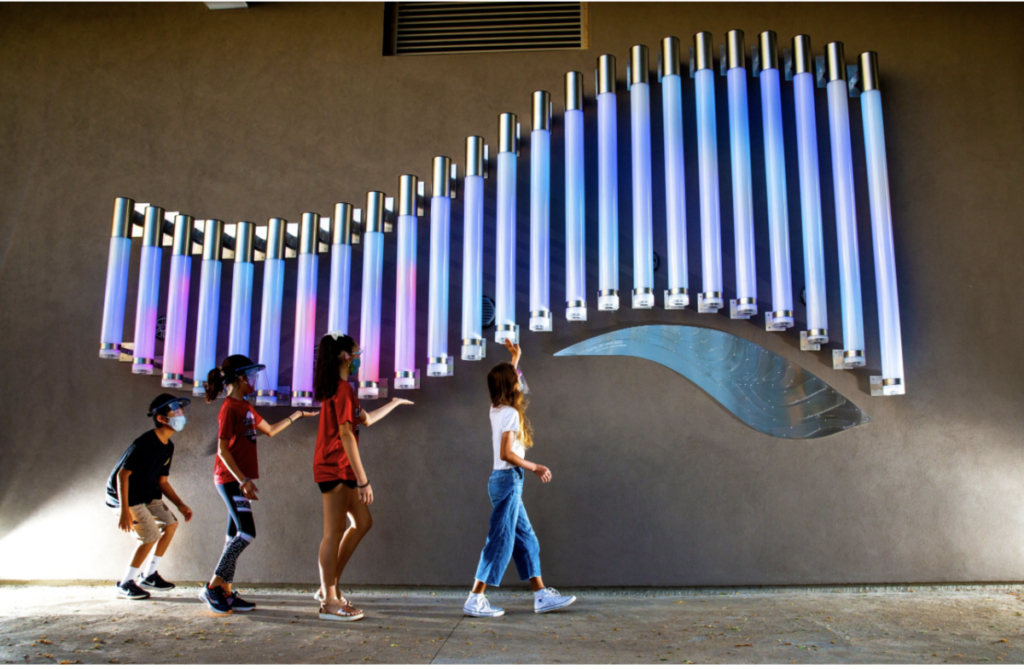 Jen Lewin, an American installation artist, known around the world for her public, interactive light landscapes is inspired by light and reflection that occurs in nature. In her latest sculpture “Flow” combines the use of LEDs, LightWare SF30/B LiDAR sensors and musical notes to create an interactive, magical, wall-mounted harp.

Designed to combine mathematical, science, music, and dance principles into an interactive experience that activates multiple senses; she hopes to teach participants that the lines between each discipline is blurred, and therefore ready for invention and growth. Flow was built to create a place for discovery, learning, and creativity for the children at ‘Iolani School in Hawaii where the harp is mounted on the wall of the dramatic art performance studios.

HOW EXACTLY DOES FLOW WORK?

When a visitor moves their hand beneath the harp, a LightWare SF30/B sensor which has been mounted at the end of each light tube is activated. This causes the LED light within the tube to be triggered,  change colour and move up the tube as if pushed from beneath – activating a specific musical note. Then depending how close to the LiDAR you place your hand and for how long, determines the range of movement and colour change of the LED and thus will affect the musical tone produced.

Originally trained as a dancer, musician, and mathematician, Jen Lewin combines all of these disciplines (art, music and movement)  in her visual work in an effort to create an immersive experience that highlights the interconnectivity between the human senses. Just as people can trigger sensors on Flow, the sculpture simultaneously triggers the human senses—initiating a “flow” of energy between the art object and the participants.

This sculpture brings together highly mathematical principles of music theory; the tones are based loosely on a pentatonic scale, which is often found in traditional Chinese music and sounds as it shifts fluidly between major and minor tonalities. Multiple layers of sound allow for both range and depth depending on the speed with which a person moves beneath each sensor.

Lewin has previously created a series of “Magical Harps” (see video below) which are a series of sculptures designed to make play an inclusive experience for children and adults of all ability levels. The ‘Iolani School approached Lewin having seen the Magical Harps, hoping that they could find a way to incorporate a dance and sound sculpture into their campus, adorning the wall outside their music and dance studios. Using the same LiDAR sensors used in magical harps and LED effects used in her Flux Chandeliers, Lewin developed a completely new body of work that incorporates vision, sight, touch, hearing, and motion into an immersive experience that encourages creativity for people of all ages.

Recently Flow has been selected as one of the top 100 projects nominated for the prestigious 2021 CODA awards. Voting for Flow closed on 30 June 2021. Winners will be announced late in August 2021.

What  are the CODA Awards?

The CODA awards celebrate the projects that most successfully integrate commissioned Art into interior, architectural, or public spaces. CODA believes Commissioned Art Matters. The CODA awards program honors the  individuals and the teams whose collective imaginations create the public and private spaces that inspire us every day.

Why not have a look at the SF30/B – the LiDAR sensor behind FLOW and see how it could benefit your project.